The other day I was reading a recent article (Aug. 1st) by Buzzfeed.com about Charleston SC titled “14 Reasons Why Life is Better in Charleston South Carolina,” and it got me thinking. As locals, we hear these things, and people share the articles on Facebook because it’s cool and fun to share these, but over the last few years, it has hit me that it has become almost mundane and too many to remember. Have we gotten complacent over what great compliments and accolades these are simply because we hear them so often?? I hope not; because articles like these, and the thousands of readers of these publications that vote on these surveys are the lifeblood of our economy. We know how great 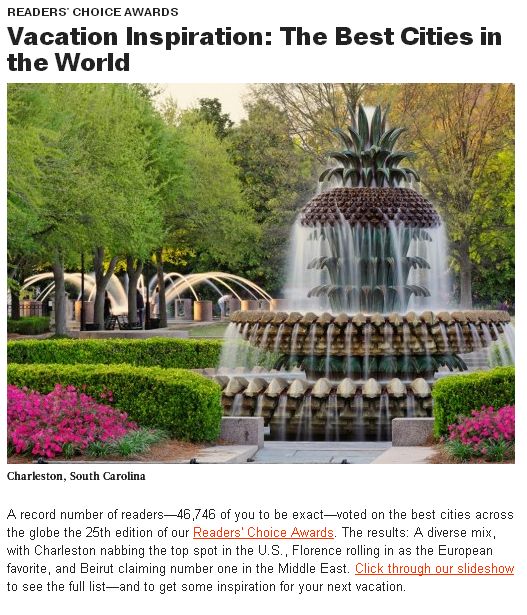 Charleston SC is, and how amazing the quality of life is, and articles such as these only confirm what we already know to the rest of the world.

The foremost respected leading publications on travel, tourism, and everything pertaining to, have spoken. Conde Nast Traveler magazine (Nation’s most respected travel publication), and Travel & Leisure magazine readers/subscribers have consistently voted Charleston, South Carolina one of the best cities in the United States, and the world for that matter. So it’s safe to say it’s not a fluke or bias that makes these writers choose Charleston, and it’s not just these two very well-known publications; CNN, USA Today, Fodors, US News & World Report, and many others have also chimed in to say the same thing. As a side note, Conde Nast magazine’s executive editor is Anna Wintour (also the long-time editor of Vogue Magazine, and who movie Devil Wears Prada was based on). Every year the readers of Conde Nast are asked to vote.

“We’ve known for quite a while that Charleston is a special place with world-class amenities and attractions,? said Helen Hill, executive director of the Charleston Area Convention & Visitors Bureau. ? The fact that the sophisticated readers of Travel + Leisure also recognize this is an added bonus.”

Bill Murray – “When I go to any other place, I just go eh“… See Entire video from Parts Unknown with Anthony Bordain HERE.

Since there are SO many kind words, articles, and awards given to our fair city, I thought I’d try to list the major ones (and this isn’t all of them) for those who might have found it overwhelming to keep up. As I did the research and work it became difficult to keep up. I stopped at 2010 although I know for a fact that these articles go back much further. Hope this helps, and enjoy.